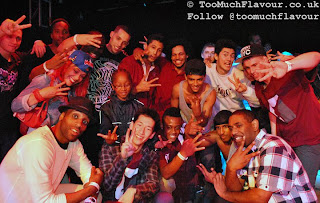 Soul Mavericks. 3x UK national champions.
This was a definite milestone in recent times for breaking in the UK.
For the third time in a row my crew won the UK Regional Conflict finals which qualifies them to represent the country at the World Finals in October.
It was a tense day for me. I had 2 Maverick crews, a new female crew I'm teaching, Soul Superior, and my grand students Breaking Hearts, in the comp.
There was a lot of expectation for us to win and of course a lot of people would love to see us fail.
All 4 crews performed superbly. It's not about winning or losing, of course we want to win, but more about getting out there and representing. Being fresh. Presenting ur skills. Showing ure part of this community and not just a tourist.
Both female crews did very well. Even as beginners, they performed in a way that made me proud. Heads up, dancing, battling, representing to the max. If they stick with it u'll be seeing a lot more of them soon.

Soul Mavericks had a sticky start facing what was probably the other strongest crew of the line up in the first round. It was a crew of Bulgarians and Dizzy from MDC!! They were international level and no joke.
Luckily, they were beaten 2 votes to 1.

Apart from that, both Mavericks crews brought fire with Mavericks X making the semi's and losing to La Familia who were beaten in the final by Soul Mavericks. An interesting fact that I think many UK crews should pay heed to, is that Mavericks will still be going to IBE to qualify and to put final touches on the preparation for October. Basically IBE acts as a qualifier for Champs where 3 crews will advance to the World Finals.

Spin gets MVP for getting to the finals in solo and team battles and repping hard as a ninja all day.
For me he is still the UK solo champion.