I recently had a discussion with Lamine from France.
He was wondering why most dancers etc on this scene have psuedo names.
Whereas most French dancers keep their original names.
Why Renegade? Why JustDoIt? Why Mouse?
It was a question that had come up before, but from the other perspective.
I've been asked on occasion 'How come French dancers use their real names?'
I had thought about it but never took the time to ask anyone who might know so the answer eluded me.

This is easier to understand now after the talk with Lamine.
Culturally, most of the 'street' dancers in France are from immigrant backgrounds. Algeria, Morocco, etc.
It seems that many of their parents would be offended if they chose to be known by another name than was given to them.
On the other hand, in the 'west' there is a tradition that stretches waaaay back, of having an alias or nickname. Sometimes to the degree that it's used more than ones original name.
Louis 'Satchmo' Armstrong, Benjamin 'Bugsy' Siegel, Norma Jeane Baker (Marilyn Monroe) immediately spring to mind.
Interestingly, many Brazilian dancers keep their original name also...Pelezihno, Neguin, Bidu. I need to find out why.
A discussion for another day. 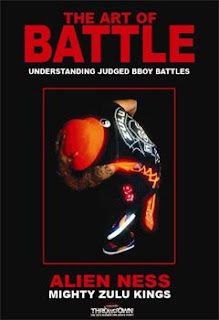 A definitive work has just been published.
The first, and only of it's kind ever done.

It's a book on the strategies of battling as applied to the art of breaking.
Written by, in my opinion, one of the foremost experts in the field and student of the art, Alien Ness.
Ness has a deep history in the game which I won't go into here, but suffice to say, the guy knows what he's talking about.
He's been putting in work for many a year and is living proof that u can keep building and contributing as long as u want.

As a mixture between a pamphlet and a book, the Art of Battle(AOB) is filled with reams of information that, in this day and age of staged battles, are extremely relevant and useful.
Invaluable to both competitors and judges, it covers many of the main issues of battling and an insight into how said battles may be viewed.
Many people don't understand the science of staged battles, how to approach them, how they are judged, how to increase one's chance of winning etc.
As an example many dancers don't realise that almost all judges use a round per round system.
Some still think that battles are judged as a 'whole'.
This book makes an attempt to look at all of this and find some type of resolution.
Whether it succeeds or not I'll leave for the buyer to decide, but trust me...u won't be disappointed.

The book is divided into 4 main parts, but really it's just one long structure.
It's written in a very free-flow/stream of conciousness manner as if he's having a conversation with the reader or holding a seminar.
For me, in a subject of this nature, it is the perfect approach.
We are, afterall, dealing with scientific art and artistic science.
We are artists, but to enable judging to be consistent and make any sense we need to look at it scientifically.

U can tell he put a lot of thought and work into this book. It's filled with so many tips we take for granted but often sleep on. ie "In a crew competition, maintain an orderly line that's clear from the dance floor."
Seems obvious, right?
Now take a look at as many battles on youtube or dvd/video that u can find and see how many times this 'rule' is broken!!

Another example: "Never steal rounds".
Huh? Many crews do this. But as Ness states; no stolen runs are ever judged by any judge he has ever met. He can also add any I have met as well. It's a waste of energy and a blatant waste of what could potentially be a good round. Either by spoiling the original run or 'throwing away' a good one.
Imagine a situation where Cico does that and hits a nice 25 round '90 that won't be counted!!
Save that stuff for the cypher battles.

This information is all within the first few pages!! Believe me, ure on to a good one here.