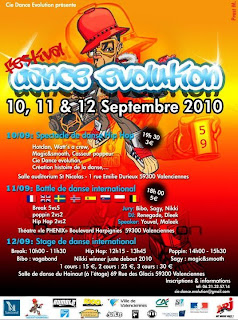 I have just returned from France.
There was a dance event in Valenciennes, near Lille, called Dance Evolution. Organised by Hot Clan crew it was a competition that consisted of 2v2 Hip Hop, 2v2 Popping and 5v5 Breaking.
Hosts were Youval and Maleek.
DJ's, myself and DLeek.

The day of the event consisted of qualifiers for Hip Hop and Popping. Breaking was by invite only and 8 crews were chosen(Norway, Spain, Poland, Slovakia and the rest from France).
I entered the popping with Sacha from Lille. I've known her for a while and we always play around battling each other for fun.
She didn't have a partner and wanted to enter and I suggested we do it together as a joke. She said yes!!
We signed up and the battle was on.

I have never entered a popping battle before.
Even though I have been popping on and off(mostly off) since 1982 this was new territory for me.
Jamming in a cypher or having an exchange with someone for a few rounds is a completely different prospect.
Add to that the fact I haven't had much time to practice recently because of all the travelling.
On top of that, we were in France. The average level in France is very high in all dance styles. So many heavy hitters come out of that country. It's no joke.
Then I found out that for the qualifier we had to battle. It wasn't showcase style.
Gulp!!
There were about 20 popping pairs of which 8 would be chosen, so I figured it would be a very short performance then I'd get back to DJing. You would not believe the shock on my face when they read out our names!!!
Anyway. Long story short, we qualified and then battled our way to the semis where we lost to Pepito and Lemzo. I think people were very surprised a)that I entered and b)that I did so well.
I'm happy.

Popping battles are way different to breaking.
In a breaking battle there is hardly any time to think. You have a much better idea of what you're gonna do. Freestyling is minimised(in general).
In popping it feels like you're out there for aaaaages. There's loads of time to think. To decipher the song. Choose which style(s) you're gonna display. Look in the opponents face. Be distracted. Then u get back to your side and completely forget what you did! This could all be down to lack of experience but I loved it. I do know one thing though. I didn't get to show half of the things I can do. More surprises to come.

A big THANK YOU to Babette, Rachid and Sagy.
Organisationwise, everything was on point for me.
Posted by DJ Renegade at 04:47 No comments:

You've probably reached this blog through a new portal called bboyinsiders.com
It's a fresh idea by BBoy Amjad, of 7$ and Circle Kingz/Princz.
Basically, it's a way to keep abreast of what's happening in the bboy world firsthand from some of the key players in the game.
I think it's a great idea. Many of us have been on this scene for a looooooooooong time and have amassed quite a bit of knowledge. In Hip Hop, we use the term 'Each One, Teach One' and this is an interesting application of the concept.
I am honoured to be included in the list.
I travel a hell of a lot to events around the globe and am quite opinionated.
I hope you'll get a few laughs from some of my blogs.
I'll comment/blog on other dances and dance events as well because I don't just DJ at bboy jams.

Anyway, nice meeting u. Stay a while.