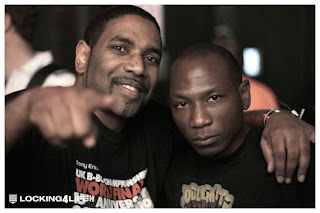 Phew!!
That was a busy one!

2010 has been another great year for me.
I did a LOT of djing and a fair amount of judging.
Covered many of the usuals but I've also observed a few things that are new.
I can't cover every event but some have stuck in my head...

At the beginning of the year Juste Debout added toprock as one of the categories at this major dance event.
I had the privilege of djing this milestone.
The winner, and deservedly so, was Y Not.
In my opinion he has been very instrumental in bringing toprock back into focus.

World BBoy Classic was dope.
The dutch seem to come up with these dope concepts all day!!
I was one of the judges and the competition was fierce.
Winners were Thesis and Keebz.
I was honoured to see Lamine KILLING it all day.
Showing everyone that older dancers can still compete at this high level.
(Along with Ness, Poe and others who also still rep).

Focus opened a dance school in Finland.
Called Saiffa, it's a step in the right direction for producing the next generation.
Flomo are one of the only true school crews in the world. They have stuck to their style throughout the years.
Not following trends, but making them.
They also have 2 of my favourite bgirls of all time. Taya and AT.
Hatsolo is also one of my favourite bboys. Raw character that only few dancers have these days.

IBE?
Biiiiiiiiiiiiiiiiiiiiiiiiiiiiiiig.
'Nuff said.
This is THE mammoth event of the year.
Too many things to cover.
Judged the UK qualifiers with Lamine and Kwikstep.
Unanimous calls every battle except maybe one.
Heard so much BS after.
IF U DON'T UNDERSTAND HOW JUDGING IS DONE, JUST ASK!!!
Don't make shit up cos ure ignorant.

UK Champs!!
For the first time in 8 years a UK crew made it through the first round!
This may not mean anything to any of you, but for us it is a 'making history' achievement.
Not only that but it is the crew I gave birth to and train/ed.
Soul Mavericks.
I am so proud.
We still have a long way to go but things are definitely changing.
Overall winners were Vagabonds, making a great return, and Flying Buddha in the solos.

Battle of the Year moved venue, and country, to Montpelier, France.
12,000 people at a bboy event!! Insane!
Had a great time.
Dj'ed for the solo competition, which Thesis won.
Jinjo won the crews.

Redbull BC One was the last big event of the year.
Looks like Redbull are here to stay.
Absolutely crazy on a production level.
It was on the level of a TV program.
Interesting battles with a few surprises.
Neguin was crowned winner. Killed it all day.

I finished off the year by being voted best BBoy DJ of 2010 on BBoyWorld.
Thank you to all those that voted for me and recognise my hard work.
Posted by DJ Renegade at 08:24 No comments: