We NEED a system.
I'm not gonna comment on any specific events or battles, but there have been a lot of weird decisions lately.
It's not even just the 'bad' decisions that are hurting the artform.
It's the inconsistency in the judging.
It's the blase attitude that some judges have when they are not paying attention to the hard work of the dancers.
When they say 'it's not a big deal'.
Or when they say one thing and judge for another.
(I mean, like what you like, but at least be consistent and wear your bias in the open.)
Or when they wait for the other judges to make a decision first.
Or when they disappear straight after judging.

I don't care who u are, what you've done or how long you've been doing it.
If you love this artform and u want it to last, it's time to grow up.
People need to be held accountable for decisions they make whilst they're being paid.
Judging is a job. Treat it like one.
Don't judge if you don't want to.
Don't judge if you don't care.
What I mean by that is there are some people who judge to feel important.
It's not a right, it's a privilege.
Take it seriously.

Jams are getting bigger and more organised. There are more competitions now than ever before. Things are going mainstream and we're old enough and experienced enough to get it right this time around.
Why is this very important aspect not being dealt with seriously?
You can't judge a 10/20 minute battle on what you 'feel'!!
You can't quantify 'style' or 'flava' or 'originality'.
You can identify when someone doesn't have it but you can't say 'A' has more than 'B'.
It's too subjective.


We NEED a system.
If we don't do it, someone else will.
Someone from outside our scene.
And you're not gonna be happy with the result.
Then you're gonna complain how 'they' took it from 'us'.
I'm surprised they haven't done it yet, but I guess we're not being taken seriously enough yet.
But they will soon. Unless you've been living in a cave you'll notice the signs.

I've had discussions with loads of dancers about this and they all agree.
Something needs to be done.

I had a long chat with Dyzee and Morris at HipOpsession til 6 in the morning!!
Dyzee's judging system is detailed and well thought through. It's taken a lot of work and effort.
He's very serious about getting it right.
I'm not in total agreement with his implementation but it's a great start.
Anyway...we NEED a system. 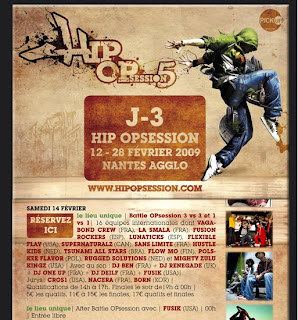 I've returned from my first big jam of 2009. It's called HipOpsession and is held in Nantes, a small city in the west of France.
This was my 3rd time performing at this event, alongside DJ Ben.
The hosts were Amjad(7$) and Nasty.
The judges were Born(Rivers/MZK), Hurricane and Cros1(Armory)

The qualifier for the 3 spare places is held during the day.

32 crews signed up to battle it out from which 6 were chosen to battle again and 3 filter through for the evening event.

Unusually for a European event we had 2 crews from the UK.
Overload(Ippy, Reasonz and JustRoc) and Breakstation(Gabs, Angry Abdul and Killaman).
Both crews did well to qualify to the top 6 and were narrowly beaten robbing them of a place in the evening.

The evening section was off the scale!!
The venue is quite big and as such allows for the main event to happen while cyphers can continue off to the side.

The battles were great. Each dancer had 2 throwdowns each until the final which is 3 rounds each.
The final battle was won by MZK(Brookz, Omar, Smurf) v Flex Flave(Abe, Morris, Future).

There was an interruption during the main battles when FloMo(AT, Hatsolo, Mercy1) beat Vagabonds(Boss K, Mounir, Youssef).
Vagabonds were unhappy with the decision and proceeded to call Born out.
Needless to say, Born accepted.
The footage is on youtube for anyone interested.

This filtered to a 3-way final, where Bootuz was eliminated, which resulted in Kleju beating JDI in the final-final.

Providing the music for the 1v1 was FUSIK.
(http://www.myspace.com/fusikmusik).
They are an amazing funk band from Florida.
When I say amazing, I mean you feel nervous having to DJ after they've been on.
I've been at a few jams where the music is provided by a live band. Sometimes it works but often it doesn't.
These guys WORK!
They play a mixture of classics and original material we bboys love to dance to.
Any promoters looking for bands to provide the right kind of vibe for their jam should definitely book these guys. Get them now while u can afford them!
No airs and graces. Friendly. Easy going. And SKILLZZZZZZZ. Look no further!!

There were also a few cypher battles after the main show.

The battles were heated and lasted a good while. Round after round of smashing runs.
The cypher was as tight as a gnats ass and it was very hard to see properly.
The quality of the dancing was 1st class!
It was one of those times where u knew u were witnessing something special.

I got to have a very interesting interview with Lamine about his view of the scene.
I'll hopefully post up the details when I have time.

Organisation-wise, I have to say this is one of the best events in Europe.
Promoters take note.

I've been to so many events where you feel like an afterthought even though you'll be providing the juice of the event for what can amount to 6-10 hours.
I'm not talking about being babysat, but clear instruction for where u need to be and when.

Even before I landed I was being taken care of.
Updates, consultation and info were provided by the team.
Hotel and food details. Schedule. Maps.
This thoughtful bit of effort goes a long way in making the right impression on your performers/artists.

A massive 'THANK U' to Nico and all the team at PickUp Productions.