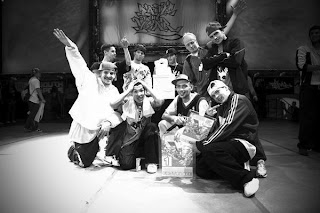 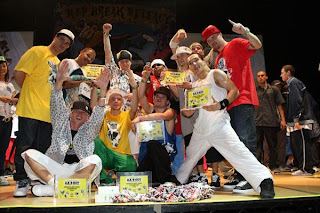 Why am I writing a piece about Top 9?
Who the hell are Top 9?
Top 9 are a crew from St Petersburg in Russia.
They are one of my favourite crews in the world and some of the nicest and realest guys I know on the scene.
They first came to UK Champs in 2004. I was judging that year along with Cros and Storm.
I had seen a little and heard a lot about them before then.
I expected fireworks. They completely dissapointed me.
Not that they weren't good, but they weren't as amazing as I thought they would be.
That can often be worse than if you don't expect much. I mean, Russia right?

Fast forward a few years.......and.......KABLOUW!!
For me they are living testament of what you can achieve if you focus and keep your mind on your game.
Creative routines, original styles and flows, great strategies, convincing dance skills. Man the list goes on.
I've seen them at a lot of jams and they always represent. Ripping it from start to finish.

I don't know if you've ever been to Russia but IT IS A TRIP!!
The place is like an 80's movie. It has this air about it.
It's one of the only countries I've been to where I've felt nervous.
Don't get me wrong, it's very beautiful, cultured and all the rest, it's just...well...scary!
Anyway, there are no provisions or facilities for 'street dancers/ing'.
I'm sure there is a lot provided for ballet and other established dances, but breaking? Fuhgedaboutit!
These guys have to train in the worse conditions, lets not forget the Russian winter that defeated both Napoleon and Hitler(although Rocky did good hahaha).
Yet, they have some of the most consistent wins and performances of the last few years.
Robin, Komar, Kosto, Flying Buddha, Tony Rock, Rezsky, Simpson, Wolt; pffffft. I'd put them up against anyone and you know it's gonna be close.
They've won or placed highly in most of the major competitions in the world. AND they actually did the double by winning UK Champs and BOTY the following week in October 2008. The first crew to do that in the history of this dance.
They faced the amazing TIP Crew from Korea in both finals which is a miracle in itself. Most crews find it hard to place highly in just one of those events. These 2 crews had pulled out all the stops.
Most people don't see behind the scenes to know exactly what that means.

Long story, shorter.
TOP 9 had issues with their visas and had to travel to Moscow and back to St Petersburg then fly to UK.
Arrived on the saturday. Came straight to the event.
Basically entered all of the side events and placed highly or won.
Kosto then went on to win the Solo comp against 15 other highly ranked dancers from around the world and, as cherry on the cake, they won the team comp. Amazing you say?
They then went straight to Germany, exhausted surely, and won the BOTH best show and the battles at BOTY the following weekend.

That is MAMMOTH!!
In fact it's INSANE!!
They are beasts.

Add to that the fact that after winning BOTY they went straight to the judges and myself and were concerned to know how they had won!!
WHAT?!?
In this business of inflated ego's and posturing, this crew of most humble dancers were questioning their win. Not their loss, which most crews whinge about ad nauseum, but their WIN. It was a close battle for sure but the decision is down to the judges.

As competitors we have to accept it, right or wrong, for or against us.
I've never seen anything like it in my life. They didn't think they had done enough to win and wanted to see the video.
Are you serious? Take the trophies and run for the hills man. Hahahah.

Seriously, do a search for them on youtube. You will not be dissapointed.
For me, It's not JUST about how dope you are, I've seen a lot of dope shit in 27 years. What matters is when that dopeness tempered with consistency and longevity. Don't just 'POP' and stop, keep it moving, keep building, improving, developing, or do something else.

Anyways, I was having a moment and just wanted to share that.

Cotdamn!!!
I need to do an update.
Been so busy I haven't had time to sort it out.
Plus, a few people said I should put pics and vids to accompany the text :-(
A picture paints a thousand words they say.
I agree.
The problem is I hate taking pics and most of the footage can be found on youtube, I'm too busy to DJ and film an event.
Maybe I should just publish and be damned. Sure there is a market for people who enjoy reading.
Yeh, that's it; I'll just write for them.