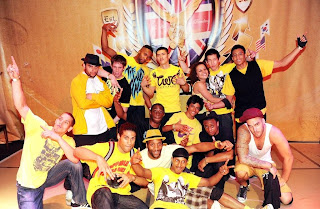 At the time there were a number of reasons for making the crew, but the main ones were a chat I had with Storm and Raphael in Denmark and another with Poe 1, also in Denmark, on another occasion.
They basically advised that if I felt the scene was so bad in the UK, I should do something about it!

When I returned from Denmark I started to ask around who was interested in going to the next level.
I could see we had some good potential here but a severe lack of direction and instruction.

I asked Mouse if he would lead the team and he agreed. He was my brother's old breaking partner and a real light shining through the darkness.
With him on my side confidence was assured.

Next step was seeing who else was serious.
I had had my eye on quite a few dancers who were on the brink of giving up or were going nowhere with their own crews.
It was offered as a type of sabbatical. "Take a year off from your crew and if this doesn't work out, you are free to return to whatever you were doing before."
The only stipulations were that they could only rep one crew and they would train as hard as I made them. No excuses.
If I could do the drills, they could too.
Gabs, Bugs and Lee from FDC joined.
K(Banner) and Lazy James from Foundations Crew joined.
AJ and Yujin from Having Fun joined.
Cake from Ghetto Lowlifes joined.
Maze and Ghost joined.

Also at the time I discovered that Hooch was offering a training spot to the scene that was completely free for use.
It was called Breakstation. No one was using it!!!
I asked him to put his trust in me and I would provide the goods for UK Champs.
No way we were gonna win but we weren't gonna embarrass the UK. We had just over 8 weeks to get ready with 1/2 the crew being beginners!
Looking back, the idea was completely insane.
Training was HARD!! None of them had ever trained like that before. There was a lot of blood, sweat and tears.
We usually started after hours, 10pm, until 2 or 3am in the morning.
I had a full-time job at the time so I basically got about 3-4 hours sleep went to work, then did the same thing again the next night.
It wasn't just a place to train. I physically taught and advised them on everything I had learnt from various sources and stuff I had made myself.
We're talking concepts, vocabulary, moves, tricks, transitions, musicality, foundation, uprock, toprock, downrock. U name it, we covered it.
It was fast-track.
To think inside, roundside, upside, downside and outside the box.

Scene-wise there was quite a bit of resistance.
Even to this day I hear untrue stories about our formation and the effect it had on our scene.
Mainly I think people were scared and were happy with the status quo of mediocrity we had here.
Many of the naysayers have either disappeared or have remained at exactly the same level(or copying shit we were doing 3 years ago hahaha).
Haters came out the woodwork. If only they knew it was their hate that kept me on it even when I was completely exhausted!!
Hahahah. Idiots.

UK Champs 2005 was a trip. 1st major battle for newly formed crew. 1st round against Pockemon! WTF!!
The guys were completely scared. This was one of the best crews in the world.
But we would not go lightly. Personally I think we took the first few rounds until Pockemon realised we weren't rolling over.
I remember afterward Rudolf commenting on how close it was.
To this day people tell me that was the day UK got it's mojo back since Second To None times.

After Champs, I extended training to anyone who wanted to improve.
We were joined by La Familia, NT, Flowzaic who were my all female crew, Broken Jazz who I had spent time training previously, and one or two other dancers that were around.
I shared the same info with them as I had with my own crew. Forget Each-One-Teach-One. This was Each-One-Teach-Twenty.
As anyone who was around at the time can testify, the level went thru the roof.
The guys I was training were either winning or placing high in any UK comp we entered.

Sadly, Breakstation was closed down shortly after.
We had a good run and a lot of development had been made.

We also lost a couple but gained a lot more dancers since that time.

All have helped or contributed to our history and as such my appreciation goes out to them.